People often think of the arm when they picture the bicep muscle. In fact, the bicep has its origins up high in the shoulder. The two headed muscle includes a “long head” and a “short head”. The long head of the bicep originates deep inside the joint of the shoulder. It anchors on the upper rim of a structure called the labrum. The labrum can be thought of as a suction cup like rim around the otherwise shallow bony socket. The bicep and labrum complex are prone to injuries and irritation due to the significant strains and deformations that happen during athletic activities. Among these problems are bicep tendinitis and SLAP tears. I’ll discuss each of these in this article.

What is the Bicep Labral Complex?

“Bicep” means “two heads”. This is because the bicep muscle has two tendinous “heads” that anchor the muscle to the top of the shoulder. The short head of the biceps anchors to the coracoid process outside the shoulder joint. It is straight and relatively trouble free. In contrast, the long head of the biceps curves sharply as it enters the shoulder joint attaching on top of the socket or glenoid of the scapula. The tendon attaches to the glenoid socket with a flared-out portion, much like the trunk of a tree. The “roots” of the tree anchor on a ring like structure known as the labrum. The labrum is a flexible cartilaginous structure that can be thought of as a suction cup like extension to the shallow shoulder socket. The labrum deepens the socket and allows important ligaments to attach and stabilize the joint. The long head of the biceps along with the upper labrum are prone to injuries and degeneration. Some of the most common shoulder problems originate with the long head of the bicep. As mentioned above, these problems include bicep tendinitis and SLAP tears. 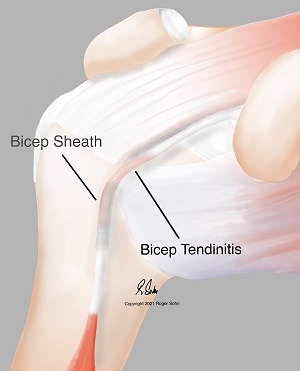 What Is Bicep Tendinitis of The Shoulder?

As mentioned above, the long head of the biceps muscle curves sharply as it enters the shoulder joint. This sharp corner subjects the tendon to significant strain and friction as the shoulder moves. The term tendinitis refers to inflammation in the tendon. This inflammation can eventually lead to damage to the fibers of the tendon. In early stages, the damage can heal and resolve. As more damage accumulates, the tendon itself can become frayed and even rupture completely. In these later stages, the problem tends to become chronic, causing lingering pain in the front of the shoulder.

What Are the Symptoms Of Bicep Tendinitis?

How Is Bicep Tendinitis Diagnosed?

What Are the Treatment Options for Bicep Tendinitis?

This problem can be self-limited. It tends to respond to physical therapy, activity modification, anti-inflammatory medications. Physical therapy is often successful at curing the problem. During physical therapy, a therapist will usually focus on stabilizing the scapular muscles which helps to reduce twist or strain in the long head of the bicep tendon.

In some severe cases, cortisone injections can help to arrest the inflammation cycle. This can help patients to do their physical therapy more effectively. Despite these conservative treatments, the pain can linger sometimes. In these cases, surgery can become a good option.

Can Surgery Get Rid of Bicep Tendinitis Pain?

Surgery is usually tried after other conservative treatments have failed. If the bicep pain continues, a surgery can be very successful at curing the problem. The surgery is done arthroscopically to reduce the scars and postoperative pain. During surgery, the tendon is detached from the upper labrum and reattached to the humerus so that it no longer rubs on the sharp corner of the humerus any longer. This is called a bicep tenodesis. In some patients the bicep tendon and its roots on the labrum are both damaged. The bicep tenodesis cures both problems because the moved tendon no longer pulls on the damaged labrum.

What Is A SLAP Tear?

SLAP stands for Superior Labrum Anterior to Posterior. SLAP tears involve tears to the bicep anchor and the surrounding labrum. These injuries to the bicep anchor are most common in active, athletic people. It is thought that the rotation and repetitive pulling of the shoulder on the long head of the bicep tendon causes the leading edge of the labrum to “peel back” off the face of the shoulder socket. Although these injuries can happen from a single trauma such as a fall, they also happen in the context of repetitive injuries. 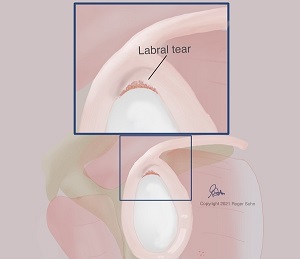 What Are the Symptoms of a SLAP Tear?

How Is a SLAP Tear Diagnosed?

A shoulder specialist can usually diagnose the problem by examining the shoulder. Certain maneuvers can help elicit pain from the long head of the bicep. An MRI can help to see the damaged area. In some patients, a special MRI called and MRI arthrogram is needed to see the damage more clearly. During an MRI arthrogram, a radiographic contrast liquid is injected into the shoulder, followed immediately by the MRI.

What Are the Treatment Options for SLAP Tears?

This problem does not tend to heal itself. Physical therapy can often improve the symptoms, but in many patients, the pain lingers and causes pain with overhead sports. Patients often choose surgery hen the pain and other symptoms get in the way of their activities or sports.

What Is the Surgery For A SLAP Tear?

In young adults (under the age of 30), a SLAP repair can often cure the problem. The surgery is done arthroscopically which makes it minimally invasive. We use instruments to create a healing bone bed under the SLAP tear. We then place anchors that reattach the labrum back to the bone bed. As time goes on, the tendon and labrum grow roots into the bone and restore their stability. This process takes about 2-3 months after which athletic activities can be slowly resumed.

In patients who are over 30, SLAP repairs have a low healing rate. In most patients in this category, I would recommend a bicep tenodesis. Bicep tenodesis has a much higher success rate in these patients.

To Schedule a Consultation With Dr. Sohn, Please Call please call or contact us